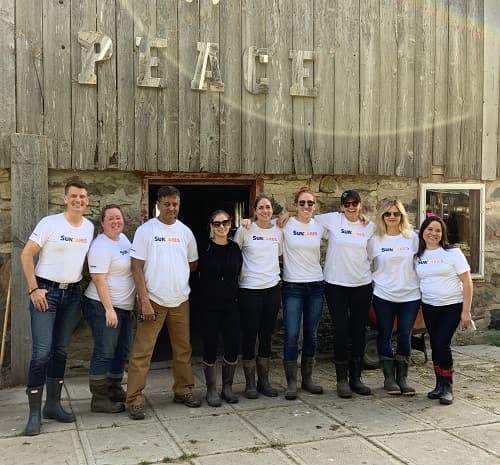 James McLean (left) volunteers with others at the Cedar Row Farm Sanctuary.

James McLean, director of national pricing, takes dedication well past his day-to-day. When he’s not at the office, James spends most of his free time volunteering with a number of organizations.

Truly embedded in his mission to make a difference in the Mississauga community, James was chosen as one of the five 2019 SunCares Changemakers. As a recipient, James had the opportunity to identify an organization of his choice to receive a one-time gift of $20,000 from Suncor or the Suncor Energy Foundation (SEF). James, passionate about various causes, decided to split the donation between them.

James has been involved in the Mississauga Public Library’s Homebound Service program for over a decade. A regular library user himself, James delivers library items including regular print and large print books, audiobooks, DVDs and magazines each month to community members unable to access the library due to limited mobility, illnesses and disabilities.

“It’s perfect that I get to help people who value library materials as much as I do, but are having challenges accessing them,” says James. “I wouldn’t give up the relationships I’ve made along the way for anything.”

One of the relationships James made was with a woman suffering from macular degeneration. After five years of delivering library materials each month to her house, she eventually lost all vision. Before moving into an assisted living facility, James set up an arrangement of audiobooks and fragrant bouquets in her new residence to make the transition as stress-free as possible.

“The money going to the Mississauga Library Homebound program will help expand materials available in large print, and their collection of audio books, so that people suffering from vision loss will be able to enjoy a wider variety of selections,” explains James.

James is also directing part of his donation to the Cedar Row Farm Sanctuary, a family run farm animal shelter that’s been rescuing animals for over 20 years. Cedar Row relies on a group of dedicated volunteers to maintain their operations and keep their doors open for animals in need.

“It’s sad that there are more farm animals rescued from abuse, neglect and slaughter than there are safe shelters for them to live,” says James. “The donation to Cedar Row Farm Sanctuary will help them expand their shelter and move new rescues to a natural and peaceful environment.”

As an animal-lover and advocate of justice for all, James also supports Animal Justice, an organization that represents the legal rights of animals in Canada. This group of lawyers work tirelessly to pass new animal protection legislation, push for the prosecution of animal abusers and fight for animal rights in court. Without a law degree, James wanted to know how he could help make a difference and support the organization.

“Since I’m not a lawyer, they asked if I could assist their fundraising by helping to develop a new grant application strategy, which is what I’m doing for them now,” says James.

The Toronto Vegetarian Food Bank is another organization James chose to direct the donation to. As a vegan, James knows how difficult it can be for some families to provide healthy, vegetarian options on a budget.

Making a difference is something James is doing for many people, and animals, in Mississauga and the surrounding area. James also chose to support the United Way of Toronto, seeing the great work the organization does in the community.

This is the fourth in a series of articles highlighting the stories of the five 2019 Changemakers announced April 8, and the impact they’re having in their communities.