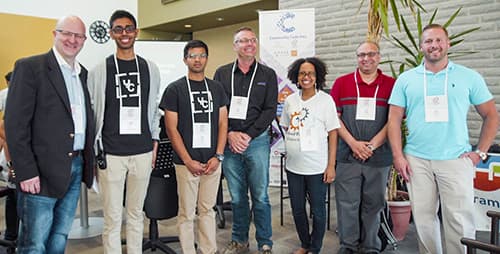 September usually signals back to school, and no one is more excited about that than D’Andre Wilson-Ihejirika, process engineer, Upstream, Suncor. This September, D’Andre launched the eighth annual Operation SMART program in collaboration with Girls Inc. of Northern Alberta and BrainSTEM Alliance – a non-profit D’Andre founded in 2012 to provide engaging STEM (science, technology, engineering and math) programs for schools and other non-profits.

Inspiring young girls in STEM is an ongoing passion for D’Andre, and led to her being named one of five SunCares Changemakers in 2019. Through the SunCares Changemakers program, D’Andre had the opportunity direct a one-time gift of $20,000 from Suncor or the Suncor Energy Foundation (SEF) to BrainSTEM Alliance.

Growing up in the Bahamas, D’Andre wasn’t aware of the opportunities that combined her two loves – math and chemistry. “It was by happenstance I ended up in chemical engineering,” says D’Andre. “I was lucky, but not all girls may be as lucky.” This is one reason providing STEM programming is important to D’Andre. “I want to help other girls make more informed decisions when they finish high school.”

When D’Andre moved to Fort McMurray, she approached Girls Inc. to get involved in their Operation SMART program. Having learned they didn’t have the resources to successfully run the program, D’Andre recruited other female engineers in the area to host the first cohort of 12 girls.

“It’s wonderful to watch the program grow to over 30 girls per cohort,” says D’Andre. “I’ve seen several girls from the program go on to win their school science fairs, make it to regionals, and even go on to study STEM majors in university!”

Coordinating the SMART program inspired D’Andre to found BrainSTEM Alliance. “When I realized that there were organizations that wanted STEM programming, but were unsure of how to start, I knew I could help.”

For the team at BrainSTEM, providing STEM programming is much more than fulfilling organizational needs – it’s about building community. “Moving to an industry town like Fort McMurray can feel isolating at times because you’re away from family and your previous lifestyle,” reflects D’Andre. “Being a part of BrainSTEM Alliance has helped me feel at home in Fort McMurray.”

BrainSTEM Alliance has expanded to other cities like Sarnia, High River, Regina and Cape Breton. With support from organizations like APEGA, BrainSTEM as been able to recruit other female engineers with a passion to volunteer in their communities.

“It’s rewarding to see the impact on the volunteers and the youth,” says D’Andre. “The best part is seeing those women progress as mentors and community builders, joining non-profit boards and getting involved in the community in various ways.”

In response to the damage caused by Hurricane Dorian, BrainSTEM Alliance is collecting donations to replace school supplies in the Bahamas in support of students studying STEM. Make a donation here.

This is the third in a series of articles highlighting the stories of the five 2019 Changemakers announced April 8, and the impact they’re having in their communities.