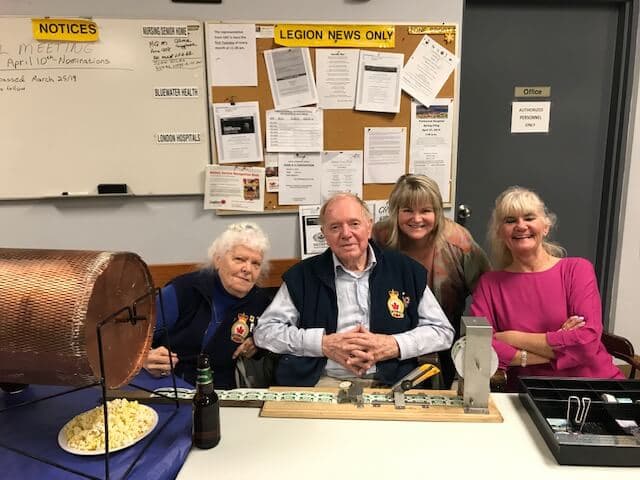 Remembrance Day was a time for us all to reflect on the brave men and women who fought for our country and our rights and freedoms. On November 11, the Sarnia Legion’s annual Remembrance Day parade took place while candles continued to burn at the Legion’s Cenotaph from a Candlelight Vigil. Sandy Whyte, avid volunteer at the Legion and one of the 2019 SunCares Changemakers, was proud to see the Legion and Sarnia’s Historical Society add another 26 names to the Sarnia cenotaph in time for the parade.

For Sandy, specialist procurement, strategy and operations services at Suncor, her involvement with the Sarnia Legion continues well past Remembrance Day. As a volunteer member of the Legion Sandy, along with other dedicated volunteers, helped start an initiative called Catch the Ace that provides funding for community programs and services year-round.

The fundraiser starts with 52 playing cards in sealed envelopes. Each week for $2 a ticket, patrons have the chance to try and pull the Ace of Spades and win the pot. Half the proceeds go to the Legion, which then allocates funds to local charities. Thirty per cent of proceeds from the night continue on to the next week’s pot, while one lucky ticket buyer wins 20 per cent of the sales.

“This event helps bring people into the Legion to learn what it’s all about and what it has to offer in a fun way,” says Sandy. “The Legion is about veterans, and it’s about community. Through fundraisers like Catch the Ace we are able to have a wide spread impact in the community by supporting a variety of organizations.”

Currently, the Legion is on its 5th Catch the Ace event, with November 14 marking week 22 without the Ace of Spades being pulled. Over the years, this event has raised over $115,000 for the Sarnia Legion and the charities it supports. Through the SunCares Changemakers program, Sandy had the opportunity to identify a community organization to receive a one-time gift of $20,000 from Suncor or the Suncor Energy Foundation (SEF), which she chose to direct to the Sarnia Legion.

“I’m excited for what the SunCares Changemaker program means for community organizations,” Sandy explains. “Changemakers can make a big difference in the communities that we live and work in.”

This is the last story in a series of articles highlighting the five 2019 Changemakers announced April 8, and the impact they’re having in their communities.