Learning from the voices of Indigenous youth

Kahenientha Cross sits in a downtown Calgary, Alta., boardroom as it fills with executives. She introduces herself to the group and asks one of the Elders in the room to light a smudge to ground everyone before their meeting begins.

For the future paramedic from Mohawk Territory in Quebec, Kahnawà:ke (gahna’wa:ge), which sits across the St. Lawrence River from Montréal, this isn’t an everyday situation. But she is there with her Indigenous Youth Advisory Council (IYAC) “family” for their first in person meeting in over two years.

As Kahenientha (gah-hen-yunn-tuh) and the other seven members of IYAC speak, the executives physically and figurately lean in to listen.

“The last two years have been hard on IYAC members,” says Kahenientha. “We haven’t been able to come together in ceremony, so this trip brought us closer. Our itinerary was jam packed; we had a lot of work to do, and a lot of conversations took place during our time together in Calgary. It was exhausting too because we show up with our hearts on our sleeves and share our stories with Suncor leaders.”

Like Kahenientha, many of the IYAC members traveled to Treaty 7 territory from across the country to meet in Calgary. One of the reasons for their gathering was to hold a recommitment pipe ceremony, led by Blackfoot Elder Casey Eagle Speaker. The ceremony helps bring the group together in commitment after so much time apart and provides an ethical working space for both Indigenous and non-Indigenous people. The first pipe ceremony was held in 2019 when the council met for the first time.

Kahenientha, despite the internal conflict she feels about being an Indigenous person working with an energy company, joined IYAC in the fall of 2019 for the council’s second in person meeting in St. John’s, Nfld.

“It was an extremely difficult decision when I was asked to join,” Kahenientha admits. “No Indigenous person wants to ‘Indigenize oil’ and I questioned Suncor’s intentions. But on the way to the airport my father reassured me that I would be able to use my strong voice to speak the truth and have the ability to find middle ground others may not be comfortable searching for.”

The idea for a youth advisory council started percolating in 2014 when Michael Lickers, a Specialist with Indigenous and Community Relations at Suncor, was developing a youth engagement strategy.

“My dad used to say, ‘if you want to find out how a community is doing, look at its children,’” explains Michael. “If the children are doing well, chances are the community is doing well. In Indigenous culture, children and youth are engaged and their voices are encouraged. We want to hear from the younger voices and to see what perspective they can bring to Suncor.”

When the council initially formed, the idea was to meet monthly by phone and twice a year in person to discuss issues, concerns and provide guidance to Suncor leaders and the Suncor Energy Foundation (SEF). However, in less than a year after its formation, the pandemic halted the council’s ability to gather face-to-face.

In September 2022, with many of the same faces as the first pipe ceremony in early 2019, both Indigenous youth and non-Indigenous leaders, including IYAC co-pipe carrier, Arlene Strom, Suncor’s Chief Sustainability Officer and General Counsel and SEF Board Chair and Chief People Officer Paul Gardner passed a pipe handmade by Elder Casey around a circle. As each person carefully held the pipe, they drew in its medicine (tobacco) and released it, along with their intentions, into the air, renewing their commitment to working together in truth and transparency.

“I’m seeing change. When leaders like Arlene and Paul talk about sharing our stories with their families and how they bring them places, like to tipi transfer ceremonies, that’s how I know it’s not all just talk. There is action behind their words.” 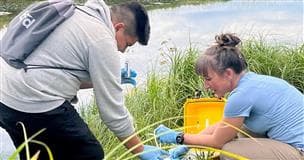 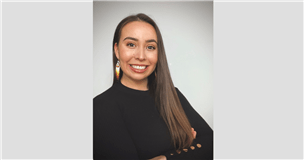