For 25 years, Suncor has voluntarily issued an in-depth report on its sustainability performance as part of its commitment to continually monitor, assess and share the impacts of its business.

Suncor has been listed on the FTSE4Good Index since 2009, a global benchmarking tool used by investors and researchers to measure the performance of environmentally and socially responsible companies.

Suncor has been named to the Dow Jones Sustainability Index (DJSI) for 22 consecutive years, through either the DJSI World or North America Index. The DJSI tracks the financial performance of leading sustainability-driven companies worldwide, based on economic, social and environmental criteria.

Suncor is also a member company of the CDP, an independent not-for-profit organization that records corporate climate change information. Suncor has reported to the CDP Climate since 2004 and CDP Water since 2010, to provide visibility and accountability to stakeholders on material sustainability topics. Suncor has been named a top reporter by the CDP for many years. For more information, see Suncor’s CDP submissions.

For the second time, Suncor has been honoured at the highest level for our work in Indigenous relations. In 2020, Suncor was re-certified at a gold level in Canadian Council for Aboriginal Business’s Progressive Aboriginal Relations (PAR) program. The award recognizes our continued commitment to collaborating with Indigenous Peoples in Canada, and is based on our performance from 2017 to 2019. PAR is a certification program that rates corporate Indigenous relations performance at a Bronze, Silver or Gold level.

In 2019 and 2020, Suncor won the Best Sustainability Report Award in the  non-renewable resources – oil and gas category from Finance Montreal’s Finance and Sustainability Initiative. Juries are composed of university students from several universities.

From 2017 to 2020, Suncor has ranked among the best 50 corporate citizens in Canada by Corporate Knights magazine. The ranking is based on company performance against environmental, social and governance indicators. 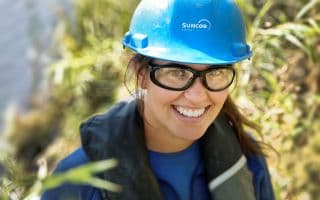 See how we're Living our Purpose