We operate the Terra Nova field, which is located offshore approximately 350 kilometres southeast of Newfoundland and Labrador. 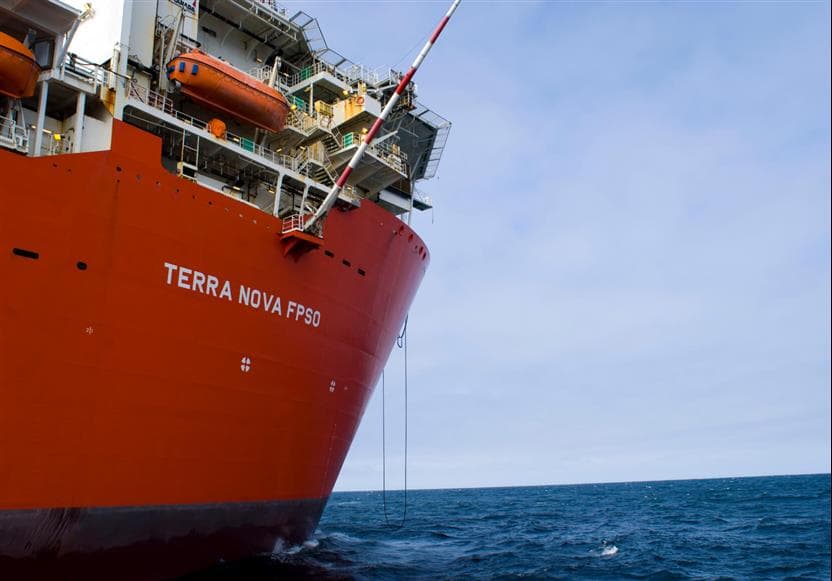 Terra Nova at a glance

The number of people directly employed on the Terra Nova project.

The length of the Terra Nova, one of the largest FPSO vessels ever built. That’s approximately the size of three football fields laid end to end.

The number of direct and indirect jobs the Terra Nova project supports in Newfoundland and Labrador.

The number of barrels the FPSO can store.

The anticipated number of additional barrels of oil that will be produced in the next 10 years for the partnership.

The amount invested in research and development in 2022.

Learn how the Terra Nova project benefits and supports the local community.

Discovered in 1984, the Terra Nova oil field was the second to be developed on the Grand Banks offshore Newfoundland. Production from the field began in 2002, using the Terra Nova Floating, Production Storage and Offloading (FPSO) vessel. This was the first development in North America to use FPSO technology in a harsh weather environment featuring sea ice and icebergs.

In 2021, Suncor and the Terra Nova joint venture owners finalized an agreement to move forward with the Asset Life Extension Project which is expected to extend production life by approximately 10 years, and produce an additional 70 million barrels of oil for the partnership. The Asset Life Extension Project has the potential to provide many benefits to the economies of both Newfoundland and Labrador and Canadian in the form of taxes, royalties and employment.

The FPSO underwent maintenance work in late 2021 prior to sailing to dry dock in Ferrol, Spain. A safe return to operations is anticipated before the end of 2022.

One of the largest FPSO vessels ever built, the Terra Nova is 292.2 metres long and 45.5 metres wide. If you can imagine, that is approximately the size of three football fields laid end to end. From the keel to the helideck, it stands more than 18 stories high. The Terra Nova FPSO can store 960,000 barrels of oil and accommodate up to 120 people while producing.

Oil production wells were pre-drilled by a semi-submersible mobile offshore drilling unit. The wellheads and production manifolds are placed in excavated holes in the seafloor, that protect the equipment from icebergs. A network of more than 40 kilometres of flexible flow lines are used to transport hydrocarbons to and from the wells. Produced gases are separated from the oil and re-injected into the reservoir to support oil production and for possible future extraction. Crude oil is offloaded from the FPSO onto large shuttle tankers for shipment.

Built for the North Atlantic

The Terra Nova FPSO is designed for the extreme weather conditions and environment in which it operates. A double-hulled, ice-reinforced vessel, it has five thrusters (two forward and three aft) and a global dynamic positioning system, which is an automated system that allows the vessel to maintain its headings. The same system reduces the impact of waves by allowing the FPSO to change to more favourable headings in high winds and storms.

In addition to the impressive design of the vessel, the Terra Nova field operation has measures and practices in place to keep its people, the environment and the facility safe. Its ice management program allows Terra Nova personnel to monitor and deflect icebergs when required. Support vessels can encircle an iceberg with a cable or net and change its direction. Water cannons or the wash from a vessel’s propellers can be used to nudge the iceberg along a different course.

This webpage contains certain forward-looking information and forward-looking statements (collectively referred to herein as “forward-looking statements”) within the meaning of applicable Canadian and U.S. securities laws. Forward-looking statements in this publication include statements regarding the Terra Nova Asset Life Extension Project, including the benefits expected therefrom such as: the duration of asset life extension and production associated therefrom; the expected timing of construction; Suncor’s expectations around the socio-economic benefits which could be attained through the Asset Life Extension Project, including employment opportunities, economic growth, enhanced community investment and the provision of valuable revenue for governments and our expectations surrounding stakeholder engagement. Please see our legal and privacy page for more information regarding Forward-Looking Statements. 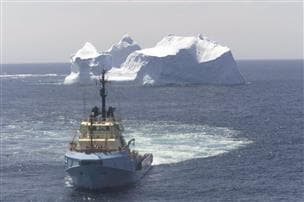 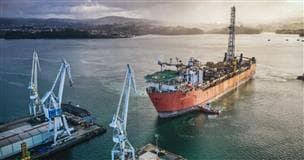